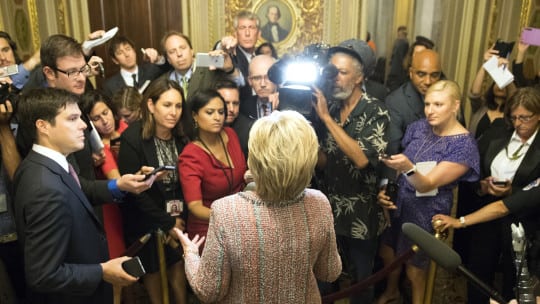 Based on my experiences as a journalist and PR practitioner, I have changed my mind about Hillary Clinton holding a press conference, which I thought she should do many weeks ago. The reason for my change of mind is that she is excelling at another method of reaching the public: answering media questions from local reporters during her campaign stops and individually with selected national reporters. This is the method I have frequently used and suggested to clients, both in the U.S. and internationally.

Here’s why I have always advised clients that there are better ways to gain media coverage than by holding bells-and-whistles press conferences:

Instead of mass press conferences, I believe the best and most efficient method of disseminating a client’s complete message is by arranging on-the-record meetings with the client and small groups of reporters. Some reporters who cannot attend are offered one-on-one meetings or telephone interviews. That way the reporters have the chance to ask penetrating questions without being held hostage by TV reporters, whose main objective is to ask a question that will afford them a few seconds of TV time, which often misrepresents the client’s position, as do the sound bites that often are the result. (I always favor offering TV interviews only to programs that afford the client sufficient time to reply to questions and eliminate “gotcha” programs, no matter how popular those programs are; same with print reporters).

I have dealt with hundreds of journalists during my PR career. The great majority said they, too, preferred these small gatherings, where they can have a chance to ask multiple follow-up questions in a controlled, relaxed setting.

I assume that before Election Day, Mrs. Clinton will hold at least one national press conference. But that will be for political reasons that are not associated with the overwhelming majority of PR clients.

PR people can learn valuable lessons by paying attention to the Clinton campaign’s media outreach. Following their lead assures a much better chance that the client’s talking points will be included in stories.

And one Very Important Point: Using the Clinton media outreach method permits PR people to control the media by choosing which reporters are offered the opportunity to attend interview sessions.

Arthur Solomon was a senior VP/senior counselor at Burson-Marsteller, a journalist and worked on election campaigns. He is on the Seoul Peace Prize nominating committee. He can be reached at: arthursolomon4pr@juno.com