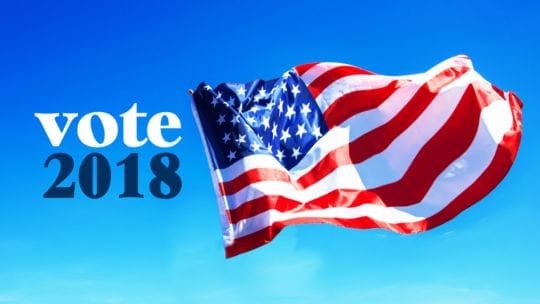 Today’s midterm elections will be the country’s most expensive, with an estimated $5.2 billion spent. The biggest spenders, surprisingly, haven’t been candidates, political action committees or advocacy groups. Instead, corporations have pumped publicity dollars into election-related initiatives, marketing and advertising.

Companies engaging in election-related visibility is not new, but the degree of corporate attention to these midterms during the last few months is a sign that the relationship between companies, consumers and politics is undergoing a significant and permanent change.

The past few election cycles offer examples of this shift in marketing mentality. The presidential election of 2012 found brands engaging in a light-hearted and product-centric way. Cheetos predicted that Barack Obama would be elected “Commander in Cheese.” Boston Market launched a menu item allowing customers to declare themselves left or right (chicken) wing. These product marketing campaigns capitalized on elections the same way they would the holiday season.

Get Out The Vote

By the 2016 election, corporate tones had changed. Brands used their marketing clout to urge people to vote. The companies who proved most successful also highlighted their products in creative ways. Doritos used students’ registration status to offer free chips on college campuses declaring, “If you’re not registered to vote, you get no choice.” Ben & Jerry’s launched Empower Mint flavor, complete with pint cups printed with instructions on how to register to vote.

In just four years the tone became more civic-minded. Tongue-in-cheek, yes — and sometimes product-centric — but incrementally more serious with a pointed goal of driving customers to vote, rather than merely to buy a product.

And now, some leading corporations’ approach to the midterms has shifted again, as exemplified by the Time to Vote coalition announced in late September. This group of 350 companies — including Lyft, Levi Strauss, Patagonia and Walmart — announced it would provide paid time off to ensure employees had time to vote.

The effort could be viewed in a partisan light. Higher turnout generally is known to favor Democrats. The coalition  has come under attack from the right, though it insists the effort is nonpartisan.

Regardless, the politically charged nature of the initiative — a marketing campaign cleverly designed to energize employees while communicating values to consumers — is a compelling reflection of the new demands customers expect brands and companies to meet. Brand publicity in this election cycle is a harbinger of what is to come.

Consider the changing nature of the average customer demographic. Consumers are holding companies to a higher standard to earn their loyalty.  Two-thirds of consumers say it’s important for brands to take public stands on social and political issues, a Sprout Social study says. While most consumers say that brands rarely or never influence their opinions on social issues, customers still expect brands to take stands. This is particularly true of those respondents who identify as liberal.

Of course, brands have to be mindful of how and when they mobilize political rhetoric. Remember Pepsi’s Jenner ad? Relevance is the key to reception. Consumers believe brands are most credible when taking on an issue that directly impacts their customers and employees (a “double bottom line” that possibly explains why the Time to Vote initiative has been so successful).

Just how far companies should go politically is unclear, both from a business standpoint and a consumer perspective. It’s not a surprise that some of the companies participating in Time to Vote already have taken stands. For example, Patagonia is suing the President for his executive order shrinking the size of several national monuments. Walmart’s chief executive criticized President Trump after Charlottesville and Lyft donated $1 million to the ACLU to help fight the Muslim travel ban.

Such bold actions can cut both ways for brands.  Almost one-third of millennials will not buy goods or services from companies if they are aware that the company has political positions different from their own, a Morning Consult survey found. That presents significant downsides for companies that are expected to take stands; they’re likely alienating a portion of their customers, no matter what they do.

Leaving Money on the Table?

This is a high-wire act for corporations. Consumers demand that their brands take stands, but — as outlined in the research above — only on issues that are relevant to customers and employees. Shareholders, though, expect that companies will sell the maximum amount of products to the most people — a goal that inevitably becomes harder when brands take a stand that risks alienating consumers.

Winning brands will be those that best navigate this political thicket. They will capitalize on civic engagement without alienating stakeholders. Just how complicated that becomes will be a topic of debate for the 2020 presidential election, during which partisan politics are sure to be even more pronounced.